English
Whitehall, London
Nearby Hotel Offers
Room Type Search
Head down to Whitehall! Stay nearby from only £15 per person
Quick Links

Head down to Whitehall! Stay nearby from only £15 per person 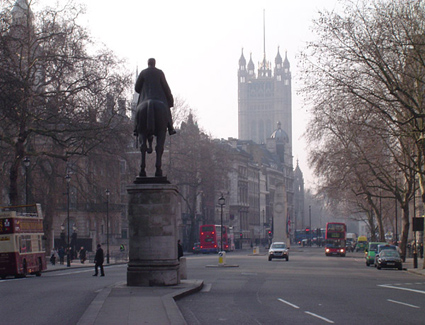 Whitehall: Where Britain's laws are made

Whitehall is the term that incorporates the UK government, although it is technically one single road in the borough of Westminster, running from Trafalgar Square at Charing Cross to Parliament Square, where the Houses of Parliament is located. This is the home of the day-to-day running of government, with department buildings in and around the road and Downing Street jutting off it. Once a year Whitehall is the centre of attention for Remembrance Sunday when the Queen lays her wreath at the Cenotaph, Britain's main war memorial, which is situated right in the centre of the busy road. Another notable sight at Whitehall is the execution place of Charles I, an event that is still commemorated today. He was executed outside the Banqueting House, the only remaining building of the Palace of Whitehall. From Whitehall, you can also reach Buckingham Palace and Westminster Bridge for a trip to other historic sights of London.

Hotels and BnBs near Whitehall London

Whitehall is located in the borough of Westminster, near notable sights including the Houses of Parliament. While here it is also easy to access sights south of the river such as the London Eye and the Tate Modern. Hotels near Whitehall are also close to Victoria, which has unrivalled transport links. The Grange Wellington Hotel is walking distance from Whitehall and is a comfortable budget London hotel, while the Pimlico Inn is also hugely affordable. Or, you could try the many London bed and breakfasts near Whitehall such as St Georges Hotel B&B. Travellers on a tight budget, meanwhile, might prefer London hostels like the Astor Victoria. You can find all this and much more when you search and book your cheap London hotel with TravelStay.com!

TravelStay Offer:
Receive £4.00 cashback towards your stay in London when you book with TravelStay!
Simply enter TravelStay promotional code: WHITEHALL-4
Subject to deposit value of £16.00 or higher.

Book to stay near Whitehall from only £15.00 per person

Last updated: 02 Dec 22
Click here for full list of over 329 London accommodations! Search Offers: Save up to 50% for hotels near Whitehall
London attractions near Whitehall