Head down to National Portrait Gallery! Stay nearby from only £15.00 per person 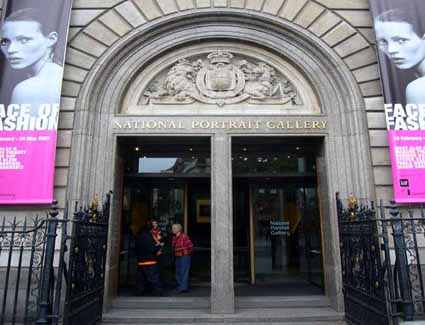 Situated in Trafalgar Square, the National Portrait Gallery is a free gallery showcasing some of the most iconic portraiture of people past and present. From 16th century paintings of royal dignitaries to 21st century photographs of Hollywood movie stars, the gallery reads like a chronological story of portraiture and celebrity throughout history. Some notable appearances of the 11,000 portraits on regular display, which represents around 60 per cent of the gallery, include one of few known portraits of William Shakespeare, some of the most famous portraits of Tudor figures including Henry VIII and Elizabeth I, a sculpture of tragic British novelist Virginia Woolf and contemporary figures such as Ian McKellen. The gallery also holds special exhibitions about an era, artist or sitter and once a year displays the finalists of the BP Portrait Award. Also in the area is the National Gallery, located just next door, and the Four Plinths, which mark the four corners of Trafalgar Square.

TravelStay Offer:
Receive £4.00 cashback towards your stay in London when you book with TravelStay!
Simply enter TravelStay promotional code: NATIONAL PORTRAIT GALLERY-4
Subject to deposit value of £16.00 or higher.

3 Star B and B
3.8
B&B near National Portrait Gallery, LondonView map
0.0 Miles

3 Star B and B
3.6
B&B near National Portrait Gallery, LondonView map
0.0 Miles

Book to stay near National Portrait Gallery from only £15.00 per person