Head down to Royal Festival Hall! Stay nearby from only per person 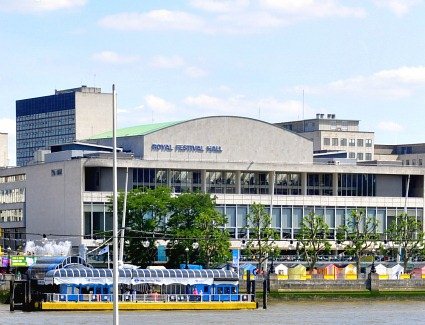 Part of the vast Southbank Centre since a major restoration in 2007, Royal Festival Hall is a large performance venue, largely for the showcase of classical music. It opened in 1951 and sits in a proud place on the banks of the River Thames. Other venues that form the Southbank Centre include the Hayward Gallery and the Queen Elizabeth Hall. While there are a number of events held here throughout the year, the Royal Festival Hall also has resident groups that perform regularly to audiences. The London Philharmonic Orchestra presents music old and new, while other residencies include the Philharmonia Orchestra, the Orchestra of the Age of Enlightenment, which aims to cater to every classical music taste, and youth-led organisation SE1 United. Also in the area south of the river are the BFI Southbank, London Eye and the Imperial War Museum, in nearby Waterloo.

There are so many things to see and do on the South Bank, home to the Royal Festival Hall, so staying in Waterloo and Southwark will put you in a good position to reach this hive of activity, as well as see the sights of nearby Westminster just across the river. TravelStay.com has a selection of hotels near Royal Festival Hall, from cheap London hotels and bed and breakfasts near Royal Festival Hall to London hostels. We have the three-star Comfort Inn London, for example, situated a short journey away in Lambeth, while the Journeys London Bridge Hostel is ideal for travellers on a shoestring. London rooms, such as Stamford Street Apartment Rooms owned by Kings College, could also be a great option for visitors keen to have a home away from home. Or, by hopping over the river to Victoria, we have London bed and breakfasts such as the St George's Hotel B&B. So whatever your choice, make sure you search now and book with TravelStay.com for the best deal.

TravelStay Offer:
Receive £4.00 cashback towards your stay in London when you book with TravelStay!
Simply enter TravelStay promotional code: ROYAL FESTIVAL HALL-4
Subject to deposit value of £16.00 or higher.

Book to stay near Royal Festival Hall from only £12.95 per person