Head down to Piccadilly Circus! Stay nearby from only £19.00 per person 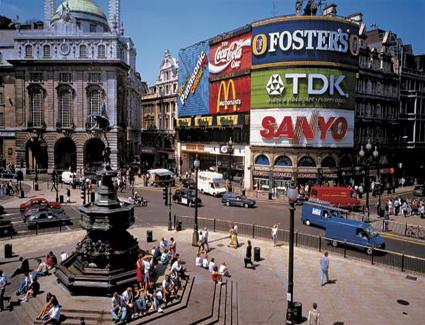 Piccadilly Circus has been one of London's most famous and busiest thoroughfares since it was built in 1819 to connect Regent Street with Piccadilly. This is a top tourist attraction and photo opportunity, as its central fountain and neon signs are one of the most photographed areas in London. To many people, it is the heart of Theatreland, with one theatre, the Criterion, on the circus itself, while many others are situated in the streets that stem from the main area. Other attractions at the site include high street shops such as Gap and Lillywhites, while the London Trocadero is also on one side of Piccadilly Circus, which is home to Ripley's Believe It Or Not 'odditorium', as well as hundreds of games arcades, shops, bars and clubs. Located close to Piccadilly Circus is Fortnum and Mason, one of London's poshest department stores, as well as Soho and Chinatown.

Visitors keen to have the neon lights of London within walking distance of their hotel room will find that there are a variety of hotels near Piccadilly Circus, from cheap London hotels and bed and breakfasts near Piccadilly Circus to budget hostels. For example, TravelStay.com offers Piccadilly Backpackers Hotel, a brilliantly cheap London hostel located behind Regents Street, which connects to Piccadilly Circus. Or, for travellers hoping to stay right in the heart of Soho, theShaftesbury Piccadilly Hotel has luxury four-star rooms available and has been recently refurbished. You also have the choice of staying in student rooms, complete with a shared kitchen. LSE's Northumberland House is one such example of this. You can find all this and more when you search and book with TravelStay.com.

TravelStay Offer:
Receive £4.00 cashback towards your stay in London when you book with TravelStay!
Simply enter TravelStay promotional code: PICCADILLY CIRCUS-4
Subject to deposit value of £16.00 or higher.

Book to stay near Piccadilly Circus from only £19.00 per person