English
Leicester Square, London
Nearby Hotel Offers
Room Type Search
Head down to Leicester Square! Stay nearby from only £15.00 per person
Quick Links

Head down to Leicester Square! Stay nearby from only £15.00 per person 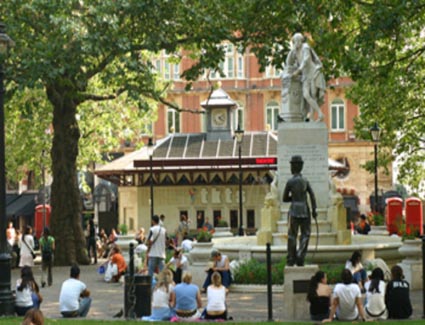 Considered by some as the heart of London's West End, Leicester Square is also known as Theatreland. Here, you can pick up a last-minute bargain to a West End show and the theatres are pocketed around the square and beyond into nearby Soho. To other Londoners and tourists, Leicester Square is known as the home of British cinema, with five cinemas on the square alone and another three nearby. UK premieres are held here and like Hollywood handprints, Leicester Square has its own Walk of Fame with plaques of Tom Cruise and Meryl Streep among many others. At night, Leicester Square really comes alive as theatre-goers come out of shows, the restaurants and bars become packed and the nightclubs open. Over two weekends in the summer, stars of London's musical theatre come out to Leicester Square for West End Live and perform songs from the shows. Meanwhile, a short walk south is Trafalgar Square, home to the Four Plinths and the National Gallery.

Located in the heart of the West End near Piccadilly Circus and Trafalgar Square, hotels near Leicester Square are convenient for reaching London's top tourist sites and falling into bed after a big night out. TravelStay.com has a range of cheap hotels in Leicester Square as well as great value London hostels, right in the centre of London. The Piccadilly Backpackers Hotel for example, has low rates and is situated in the middle of the youthful area of Soho. Or for a bit of luxury, we have the four-star Shaftesbury Piccadilly Hotel, which also has a brilliant central location. Another option is to stay in London rooms like Northumberland House, owned by LSE and complete with shared kitchen. All of these and more are available to book with TravelStay.com.

TravelStay Offer:
Receive £4.00 cashback towards your stay in London when you book with TravelStay!
Simply enter TravelStay promotional code: LEICESTER SQUARE-4
Subject to deposit value of £16.00 or higher.

Book to stay near Leicester Square from only £15.00 per person