English
Chinatown, London
Nearby Hotel Offers
Room Type Search
Head down to Chinatown! Stay nearby from only £15.00 per person
Quick Links

Head down to Chinatown! Stay nearby from only £15.00 per person 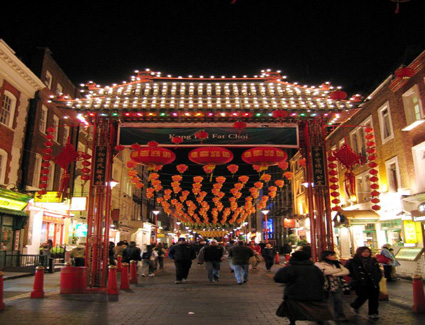 London is home to a Chinese population of 80,000 and Chinatown is a large part of the West End's social history. Tucked away in London's Soho, the streets along Shaftesbury Avenue are filled with Chinese restaurants, bars and shops. This is a popular area for Chinese cuisine, while the Chinese food stores sell authentic Oriental ingredients, so you can test out your own Chinese cooking yourself. February is when Chinatown really comes alive as millions of people celebrate Chinese New Year all over the world. Chinatown usually celebrates its New Year celebrations the following Sunday, with large open-air events along the streets and in nearby Trafalgar Square and Leicester Square. Past years have seen world-class dance, music, dragon dances and acrobatics at the free events and the streets are decorated with Chinese lanterns. And to top off the night, Leicester Square hosts a fantastic fireworks display.

Hotels and BnBs near Chinatown London

Situated in the heart of Soho and Piccadilly Circus, hotels near Chinatown are ideally situated for people who want a busy holiday. TravelStay.com has a number of cheap hotels in Soho and London B&Bs in Soho, placing you in amongst the busy shopping district during the day and near the restaurants and bars at night. Staying in budget hotels in Central London is also great for getting back easily after a night at a West End theatre, as Chinatown is also right next to London's Theatreland. A great example is the luxurious four-star Shaftesbury Piccadilly Hotel, which sits just seconds away from Chinatown. Or, for a really budget idea, the Piccadilly Backpackers Hotel is a great value London hostel, just minutes from the famous Piccadilly Circus. Another great idea could be to opt for the London studios in the West End, like Grosvenor House Studios, giving you the comfort of staying in a private apartment away from home. So whatever you choose, make sure you look for the best deal on bed and breakfasts near Chinatown when you search on TravelStay.com.

TravelStay Offer:
Receive £4.00 cashback towards your stay in London when you book with TravelStay!
Simply enter TravelStay promotional code: CHINATOWN-4
Subject to deposit value of £16.00 or higher.

Book to stay near Chinatown from only £15.00 per person

Last updated: 07 Dec 22
Click here for full list of over 329 London accommodations! Search Offers: Save up to 50% for hotels near Chinatown