Head down to The London Dungeons! Stay nearby from only per person 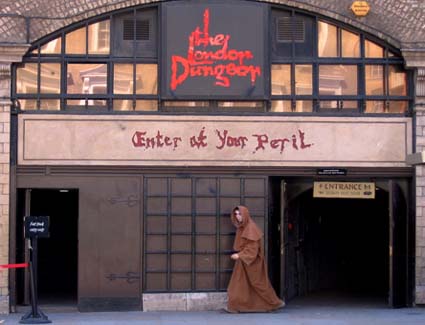 Chronicling London's thousand-year history of gruesomeness, the London Dungeon is the scariest attraction around. It features parts of London's goriest history, from the Great Plague to the prisons of the Tower of London. From different methods of torture to executions, you can see a different side to London's past. There are two rides at the museum, the Traitor Boat Ride to Hell, which goes into the depths of the dungeon, and the Drop Ride to Doom, which recreates the experience of feeling the drop of the hangman's noose. Here you'll also meet two of London's most famous killers, the demon barber of Fleet Street Sweeney Todd and real-life murderer Jack the Ripper, who walks the streets of Whitechapel. On exiting into modern day London Bridge, visitors can also head to nearby Borough Market for a bite to eat, which opens from Thursdays to Sundays, or continue the horror theme at the Clink Museum.

Hotels and BnBs near The London Dungeons London

Map of The London Dungeons, London

TravelStay Offer:
Receive £4.00 cashback towards your stay in London when you book with TravelStay!
Simply enter TravelStay promotional code: THE LONDON DUNGEONS-4
Subject to deposit value of £16.00 or higher.

Top Pick
Book to stay near The London Dungeons from only £17.00 per person