English
HMS Belfast, London
Nearby Hotel Offers
Room Type Search
Head down to HMS Belfast! Stay nearby from only per person
Quick Links

Head down to HMS Belfast! Stay nearby from only per person 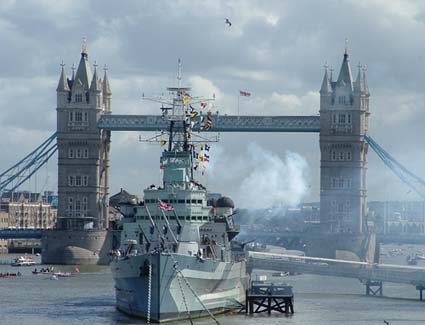 HMS Belfast: Explore the historic WWII ship on the banks of the Thames

As the only surviving vessel to have seen active service during the Second World War, HMS Belfast is a landmark and iconic site on the banks of the River Thames. The ship also saw service during the Korean War and was used by the British Navy throughout the 1960s. Now, it forms part of London's Imperial War Museum and is the first ship to be preserved in the UK since Nelson's Victory, which is docked in Portsmouth. HMS Belfast faced destruction in 1971, but now visitors flock to learn about Britain's naval history and explore the insides of a cruiser. From the deck you can also get a great view of the blue steel struts of Tower Bridge, while more British war history can be found south of the river at the Imperial War Museum, appropriately near Waterloo Station. Meanwhile, you can have a great day out along the South Bank. Heading towards Westminster, you'll find Shakespeare's Globe, Tate Modern, the London Eye and the London Aquarium, not to mention plenty of bars and restaurants to stop in at along the way.

Situated on the South Bank of the River Thames near London Bridge, you can find lots of hotels near HMS Belfast. This is a thriving area of London with plenty of things to see and do. Therefore, it is also a great place to stay in budget London hotels, bed and breakfasts near HMS Belfast or London hostels. TravelStay.com has a selection of cheap hotels in London Bridge, such as the three-star Holiday Inn Express Southwark. For a holiday on a shoestring, the Journeys London Bridge Hostel offers cheap beds in a great location. However, staying in a London apartment could suit those after private accommodation or a home away from home. Situated on the South Bank are Bankside Apartments, just walking distance from all of the attractions of HMS Belfast. Search now and Book your stay with TravelStay.com now!

TravelStay Offer:
Receive £4.00 cashback towards your stay in London when you book with TravelStay!
Simply enter TravelStay promotional code: HMS BELFAST-4
Subject to deposit value of £16.00 or higher.

Top Pick
Book to stay near HMS Belfast from only £18.70 per person