English
Tower Bridge, London
Nearby Hotel Offers
Room Type Search
Head down to Tower Bridge! Stay nearby from only per person
Quick Links

Head down to Tower Bridge! Stay nearby from only per person 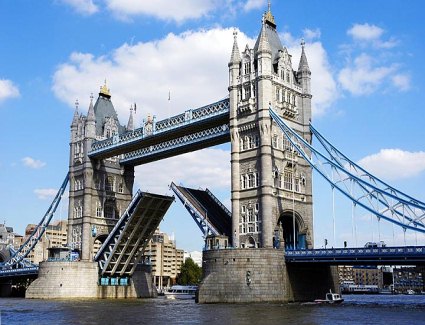 Constructed at the end of the 19th century, Tower Bridge is one of London's later bridges, but possibly the most iconic of them all. Its striking blue steel stands out from all other bridges on the Thames and visitors can climb up to the high-level walkways to get a stunning view of London. And while the hydraulic bridge is no longer operated by steam engines, rather by oil and electricity, the Tower Bridge Exhibition museum has the original pumping engines on display. Currently, a three-year restoration project is taking place on Tower Bridge, involving a total re-paint and stone cleaning, although the bridge and the walkway will remain open during the process. One of the best ways to see London is to cross Tower Bridge, starting at the historic 11th century Tower of London and reaching the South Bank, where the recreated Shakespeare's Globe Theatre and the London Eye are located.

TravelStay.com has a number of hotels near Tower Bridge, both on the north and south bank of the River Thames. We have cheap London hotels towards the east of London, as well as London studios in Bermondsey, south of the river. For example, Great Dover Street Apartment Rooms offers budget rooms from Kings College London in Southwark, a short walk from Tower Bridge, while Bankside Apartments, part of LSE, are also nearby. The one-star Hour Glass Hotel is a great value budget London hotel in South London or you can find comfortable three-star accommodation at the Holiday Inn Express London Limehouse, which is located in London's historic Docklands area north of the river, which is convenient for reaching Tower Bridge and the Tower of London, as well as the O2 Arena. You can find all this and more when you book a cheap London hotel with TravelStay.com, so search now and pick your favourite from our list of bed and breakfasts near Tower Bridge.

TravelStay Offer:
Receive £4.00 cashback towards your stay in London when you book with TravelStay!
Simply enter TravelStay promotional code: TOWER BRIDGE-4
Subject to deposit value of £16.00 or higher.

Book to stay near Tower Bridge from only £18.70 per person

Last updated: 30 Jan 23
Click here for full list of over 329 London accommodations! Search Offers: Save up to 50% for hotels near Tower Bridge