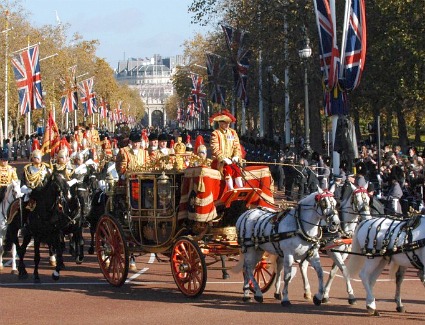 Royal Mews: The stables and garage to Buckingham Palace

Perhaps the most royal stables to be seen throughout the world, the Royal Mews houses not just the Queen's horses, but also the carriages used for official duties and ceremonies. Here, you can see the Gold State Coach, last used for the Queen's Golden Jubilee in 2002, as well as horse-drawn carriages used for coronations, state visits, royal weddings and the lavish State Opening of Parliament. Some of the Queen's cars are also stored at the Royal Mews, while the working horses that carry the carriages also live here. Horse fans will find Cleveland Bays, a breed of carriage horse, and Windsor greys, which traditionally draw the Queen's carriage. Other attractions at Buckingham Palace include the Queen's Gallery, which has changing exhibitions of items from the Royal Collection, from paintings to furniture. In the summer, visitors can walk through the 19 State Rooms, used for entertaining guests and holding grand banquets. From Buckingham Palace, you can watch the Changing of the Guard and walk down the Mall towards Trafalgar Square to see the Horse Guards.

Buckingham Palace is located in the Victoria area, where many tourists come to stay as the neighbourhood is a hive of activity and has useful transport links, particularly to Gatwick Airport. Therefore, hotels near Royal Mews are in abundance. TravelStay.com has a selection of cheap hotels in Victoria, as well as London hostels and bed and breakfasts in Victoria. You can try the Stanley House Hotel for budget two-star accommodation, which is also close to Victoria Train Station and Westminster Cathedral. Or, for really cheap rates, the Belgravia Rooms London offers one-star accommodation to travellers. We have a number of London B&Bs such as the Chester Hotel Victoria, while the Astor Victoria has great rates on beds at this London hostel. You can be sure to find London accommodation to suit any budget in Victoria and TravelStay.com can make finding the perfect hotel even easier!

TravelStay Offer:
Receive £3.00 cashback towards your stay in London when you book with TravelStay! Simply enter TravelStay promotional code: ROYAL MEWS. Subject to deposit value of £15.00 or higher.

Best Value
Book to stay near Royal Mews from only £15.00 per person

Last updated: 07 Jul 20
Click here for full list of over 329 London accommodations! Search Offers: Save up to 50% for hotels near Royal Mews