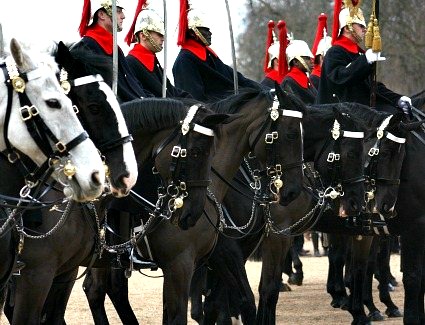 Horse Guards: Watch the mounted soldiers before observing the view of the Mall

Built on the site of the Guard House of the old Whitehall Palace which burned down in 1698, the mid-18th century building of the Horse Guards is now used as the official headquarters of two London regiments. Its imposing archway is guarded by members of the Household Cavalry, including mounted guards. Marking the space between the building and the start of the Mall is the Horse Guards Parade. Here, the annual Trooping of the Colour takes place to commemorate the monarch's birthday, but back in Henry VIII's time, it was used for tournaments. After visiting the Horse Guards it is worth taking in the view from the parade grounds up the Mall and observing the approach to Buckingham Palace, where the Changing of the Guard also happens. Other iconic sights in the area include Trafalgar Square and Downing Street.

Situated in Whitehall in the borough of Westminster, hotels near Horse Guards can still be good value. The cheap London hotels in Whitehall have the benefit of being close to Victoria, the terminal for the Gatwick Express, which makes the area very popular among tourists. TravelStay.com has great examples of the budget apartments available just minutes from the Horse Guards. Northumberland House is owned by LSE and has a shared kitchen and even a selection of open plan studios. Meanwhile, the Grange Wellington Hotel offers comfortable budget London hotel accommodation also walking distance away. TravelStay.com's London bed and breakfasts in Victoria could be another useful option, such as the convenient two-star Chester Hotel Victoria. Just make sure that you book in advance with TravelStay.com as these rooms go fast!

The Horse Guards represent antiquated tradition and British showmanship, and are a great pull for tourists from inside and outside the UK. Hotels near Horse Guards give visitors the chance to see Changing the Guard at Buckingham Palace, as well as visit important sites such as the Houses of Parliament and Westminster Abbey. Located on the opposite side of the river to Waterloo and the South Bank, tourists staying at one of the many bed and breakfasts near Horse Guards can also make the most of attractions there. To get the best deals and most up-to-the-minute discounts TravelStay.com has to offer, scroll down or search now!

TravelStay Offer:
Receive £4.00 cashback towards your stay in London when you book with TravelStay!
Simply enter TravelStay promotional code: HORSE GUARDS-4
Subject to deposit value of £16.00 or higher.

Book to stay near Horse Guards from only £15.00 per person