English
The O2 Arena, London
Nearby Hotel Offers
Room Type Search
Head down to The O2 Arena! Stay nearby from only per person
Quick Links

Head down to The O2 Arena! Stay nearby from only per person 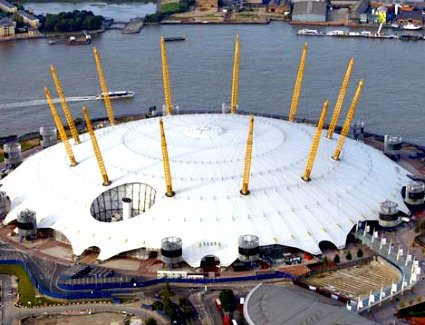 The O2 Arena, once known as the Millennium Dome, has played host to some of the world's biggest music acts and entertainment shows. With a capacity of up to 20,000 people, the venue is a staple on the tour lists of anyone from Elton John to popular comedy acts like Michael McIntyre. Sport is also a big part of the arena, which showcases major events throughout the year. It will also host the gymnastics and basketball events at the London 2012 Olympics. Meanwhile, the indigO2 provides a music venue on a more intimate scale, and other exhibitions are held at the O2 bubble. Added to all of this, there is an 11-screen cinema plus bars and restaurants along Entertainment Avenue, which covers over half of the floor space at the arena and is even longer than Bond Street. Anyone heading to the O2 Arena for a gig can find that nearby Greenwich also has plenty going on, including Greenwich Park and the National Maritime Museum.

Hotels and BnBs near The O2 Arena London

Hotels near the O2 Arena are located towards Greenwich in South-East London, although the Thames Clipper can take you to London Bridge without the fuss of taking the busy tube after a gig. TravelStay.com has great value cheap hotels in Greenwich which put you in a peaceful area outside Central London that has its own vibrant nightlife and sights to see. We have the Antigallican Hotel near Woolwich, which is just a short bus ride away from the O2 Arena, while Hotel Onesixtwo provides intimate four-star guesthouse accommodation. Located near Greenwich Park, meanwhile, is Journeys Greenwich West Hostel, which has brilliantly cheap bed rates. We also have budget London rooms in nearby New Cross, which is also good for getting to Central London in minutes. Southside Budget Rooms gives you the best of both worlds: Central London and Greenwich. Whatever you choose, know that TravelStay.com has excellent cheap London hotel rates and great value bed and breakfasts near The O2 Arena on offer, so search now!

Map of The O2 Arena, London

TravelStay Offer:
Receive £4.00 cashback towards your stay in London when you book with TravelStay!
Simply enter TravelStay promotional code: THE O2 ARENA-4
Subject to deposit value of £16.00 or higher.

Last updated: 21 Jun 21
Click here for full list of over 329 London accommodations! Search Offers: Save up to 50% for hotels near The O2 Arena