English
The Cutty Sark, London
Nearby Hotel Offers
Room Type Search
Head down to The Cutty Sark! Stay nearby from only per person
Quick Links

Head down to The Cutty Sark! Stay nearby from only per person 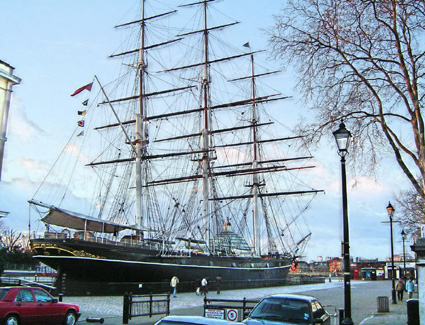 Cutty Sark is the world's last remaining tea clipper and is a symbol for Greenwich. It was badly damaged by a fire in 2007, although luckily it was undergoing conservation, which meant that many of the materials were saved. Now, the iconic ship is set to re-open in 2012, providing improved access and new exhibition space beneath the ship's hull. Built in 1869, the Cutty Sark was the last tea clipper to be used, sailing from China to London during the famous races to bring back the first tea of the year. Once steam ships took over, the ship has been on display since 1954. Just next door to Cutty Sark is the popular Greenwich Market, while the naval history continues at the National Maritime Museum. Visitors to Greenwich can also explore the area's shops, bars and restaurants and take in the view from Greenwich Park.

Hotels and BnBs near The Cutty Sark London

Situated in Greenwich, hotels near Cutty Sark are also perfect for seeing other attractions in the area such as the Royal Observatory in Greenwich Park. This area of Greenwich is also close to the River Thames, where you can catch a boat to Westminster or walk underneath the river to the Isle of Dogs and Canary Wharf. By staying in cheap hotels in Greenwich, you are also close to gigs at the O2 Arena, allowing you to avoid commuting back to Central London after an event. Hotel Onesixtwo is located in Greenwich, offering intimate and luxurious four star accommodation, while at the other end of the scale you can stay at the Antigallican Hotel, just a short bus ride from Cutty Sark. TravelStay.com also lists hostels in Greenwich, such as the Journeys Greenwich West Hostel for trips on a shoestring. Just check out TravelStay.com for more budget hotels in London plus bed and breakfasts near Cutty Sark, and search now for your perfect one.

Map of The Cutty Sark, London

TravelStay Offer:
Receive £4.00 cashback towards your stay in London when you book with TravelStay!
Simply enter TravelStay promotional code: THE CUTTY SARK-4
Subject to deposit value of £16.00 or higher.

Hostel
0
Hostel near The Cutty Sark, LondonView map
0.0 Miles
Book from
£15.00
per person

Book to stay near The Cutty Sark from only £12.99 per person

Last updated: 21 Jun 21
Click here for full list of over 329 London accommodations! Search Offers: Save up to 50% for hotels near The Cutty Sark