Head down to Royal Albert Hall! Stay nearby from only per person 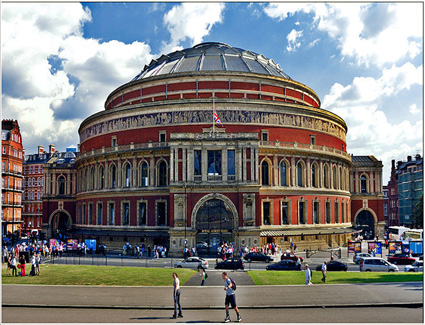 The Royal Albert Hall was created out of Prince Albert's vision to provide a central hall that would promote the appreciation of the arts and sciences, set in the home of learning, South Kensington. This is also the location of the Science Museum, Victoria & Albert Museum and the Natural History Museum, as Queen Victoria and her consort were advocates of learning. The venue opened in 1871 and since then has held exhibitions and music events to millions of people, most notably hosting the BBC Proms each year. Christmas is also a popular time for the Royal Albert Hall, as it puts on Handel's Messiah each year, as well as carol concerts and other festive events. At other times of the year the venue showcases operas, such as the sell-out production of Madam Butterfly, which drowned the main auditorium to create a Japanese water garden. Popular artists as well as classical performers, jazz acts and comedians have also put on performances at the famous stage.

Situated in South Kensington, hotels near the Royal Albert Hall are also perfect for reaching London's top museums, including the V&A Museum, and for shopping at Harrods department store. TravelStay.com has a number of cheap hotels in South Kensington, which is an extremely popular area among tourists. And despite being a posh area, we also have a selection of affordable London hostels in South Kensington and London B&Bs. Located just minutes from the Royal Albert Hall is the Astor Hyde Park hostel, and we also have Acacia Hostel London. Meanwhile, the two-star Cromwell Hotel London is a great value budget London hotel, as is the three-star Abcone Hotel London. So make sure you search now and book in advance to get great rates on bed and breakfasts near the Royal Albert Hall with TravelStay.com!

TravelStay Offer:
Receive £4.00 cashback towards your stay in London when you book with TravelStay!
Simply enter TravelStay promotional code: ROYAL ALBERT HALL-4
Subject to deposit value of £16.00 or higher.London

Book to stay near Royal Albert Hall from only £17.00 per person

Last updated: 07 Dec 22
Click here for full list of over 329 London accommodations! Search Offers: Save up to 50% for hotels near Royal Albert Hall