Head down to Petticoat Lane Market! Stay nearby from only per person 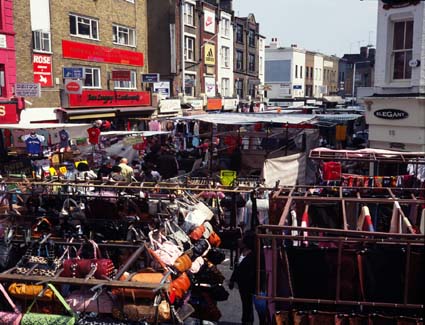 Petticoat Lane Market: Selling clothes and goods for over 200 years

As one of the most famous East End markets, there are more than 1,000 stalls that come out every Sunday at Petticoat Lane Market, selling mostly clothes, but also household goods and bric-a-brac. Keen-eyed shoppers can also find that Petticoat Lane vintage is highly sought-after by locals, and you can pick up designer gear from last season at discounted prices. Perhaps confusingly, Petticoat Lane does not actually exist. Instead, the market is found on Middlesex Street, renamed by the Victorians in 1846 as they wanted to avoid references to the undergarments and lace traditionally sold at the market by the Huguenots who populated the area in the late 18th century. However, visitors can still get a bargain whatever the name, before heading to nearby Spitalfields Market, which sells handmade jewellery, fashion and art. This area also has a number of permanent high street stores, restaurants and cafes, while Brick Lane, also close to the markets, has a huge number of bars and Asian restaurants.

Located in London's East End near Aldgate and Liverpool Street, the hotels near Petticoat Lane Market are also handy for getting to the trendy bars and clubs of Hackney, as well as top East End attractions such as the Whitechapel Art Gallery, Columbia Road Flower Market and the London Docklands. Visitors will find that TravelStay.com has a selection of cheap London hotels and London bed and breakfasts near Petticoat Lane Market available to book. For example, the Holiday Inn Express Limehouse provides three-star accommodation in the Docklands area, which is also close to City Airport. Meanwhile, our London bed and breakfasts in Bethnal Green, an area which is just a short bus ride from Aldgate, include the City View Hotel London. Or, choose a night of four-star luxury at the Re Hotel London Shoreditch, close to Liverpool Street Station. We also have private apartments available to book, such as House 519. So whatever you prefer, make sure TravelStay.com is your first choice to search and book!

TravelStay Offer:
Receive £4.00 cashback towards your stay in London when you book with TravelStay!
Simply enter TravelStay promotional code: PETTICOAT LANE MARKET-4
Subject to deposit value of £16.00 or higher.

Top Pick
Book to stay near Petticoat Lane Market from only £12.10 per person

Last updated: 30 Jan 23
Click here for full list of over 329 London accommodations! Search Offers: Save up to 50% for hotels near Petticoat Lane Market