English
Brick Lane, London
Nearby Hotel Offers
Room Type Search
Head down to Brick Lane! Stay nearby from only per person
Quick Links

Head down to Brick Lane! Stay nearby from only per person 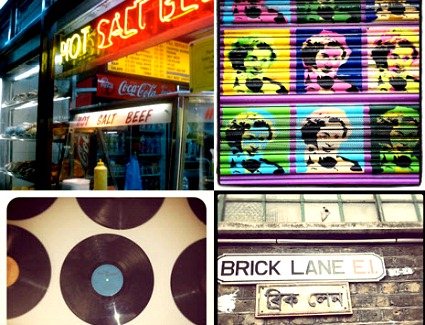 Possibly one of the trendiest areas in London is Brick Lane. This is where many of London's hot young artists first display their work, while the East End's Asian culture also comes alive, creating a unique fusion of styles on this one long street. Restaurants are in abundance in Brick Lane, with waiters outside inviting customers for Indian and Bangladeshi cuisine, while at the other end of the spectrum, clubs and bars attract a youthful crowd into the small hours of the morning, a particular favourite of the East End drinkers being the Big Chill Bar. The popular area of Shoreditch is also nearby. After a night out, the 24-hour bagel stores become packed with late night revellers as the owners get on with their production line of making salt beef. During the day, Brick Lane is a popular destination for people after vintage shopping, with warehouse-sized stores selling anything from past decades, while on Sundays the street becomes a hive of activity as the market opens. Contemporary art is also a major feature of Brick Lane. The Truman Gallery hosts an annual graduate art fair, displaying the final year projects, while throughout the year there are a number of galleries to check out.

Located in the heart of the East End, Brick Lane is home to a host of cheap London hotels and London B&Bs. Just walking distance from Brick Lane is the trendy area of Shoreditch, home to the four-star Crowne Plaza London Shoreditch, where you can stay in a bit of luxury! Or you could opt for a cheap London hotel option such as the Re Hotel London Shoreditch. However, family-run London bed and breakfasts near Brick Lane in Bethnal Green could be another idea, as the neighbourhood sits at the top of end of Brick Lane. An example of the B&Bs available is the City View Hotel London. This also puts you in close proximity to other East End attractions such as Victoria Park and Hackney. You can be sure that staying in hotels near Brick Lane will be cheap and convenient, so search TravelStay.com now!

TravelStay Offer:
Receive £4.00 cashback towards your stay in London when you book with TravelStay!
Simply enter TravelStay promotional code: BRICK LANE-4
Subject to deposit value of £16.00 or higher.

Top Pick
Book to stay near Brick Lane from only £18.70 per person

Last updated: 28 Nov 22
Click here for full list of over 329 London accommodations! Search Offers: Save up to 50% for hotels near Brick Lane