English
Marble Arch, London
Nearby Hotel Offers
Room Type Search
Head down to Marble Arch! Stay nearby from only £22.25 per person
Quick Links

Head down to Marble Arch! Stay nearby from only £22.25 per person 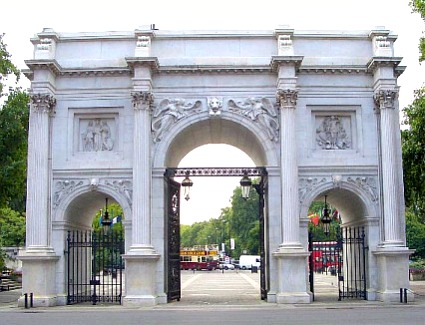 Marble Arch: Once a royal gateway to Buckingham Palace

Marble Arch has been at its present location, a junction between Oxford Street, Park Lane and Edgware Road, since 1855, although it was originally intended to be the royal gateway to Buckingham Palace when it was first constructed in 1828. Made of white marble, as the name suggests, it now marks the north-east entrance to Hyde Park. Based on the triumphal arch of Constantine in Rome, the arch does actually have small rooms inside, once used as a police station, although they are inaccessible to the public. Marble Arch has also now come to include the area around the site, particularly the top end of the Oxford Street shops, including Primark, department store Selfridges and the UK's largest Marks & Spencer. Also located in nearby Hyde Park is the notable Speakers' Corner, as well as the contemporary art displays at the Serpentine Gallery.

There are plenty of hotels near Marble Arch, which is located on the corner of Hyde Park. Here, visitors have great access to the park and its attractions, as well as the busy shopping district of Oxford Street. It is also easy to head back to cheap London hotels in Marble Arch after seeing a show or dancing the night away in London's West End. TravelStay.com has a wide selection of budget London hotels, such as the two-star Marble Arch Inn or Griffin House Hotel, while we also have London bed and breakfasts near Marble Arch like the Boston Court Hotel. Other options available are the London hostels in Marble Arch like the Dolphin Inn or Equity Point Hostel. All this and more when you book with TravelStay.com. Don’t delay, start your search today!

TravelStay Offer:
Receive £4.00 cashback towards your stay in London when you book with TravelStay!
Simply enter TravelStay promotional code: MARBLE ARCH-4
Subject to deposit value of £16.00 or higher.

Top Pick Family Friendly
Book to stay near Marble Arch from only £22.25 per person