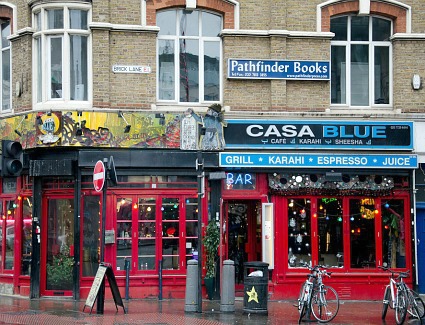 Positioned right at one end of Brick Lane, there’s no better place to start your night out than Casa Blue – and it’s at the right end to start! So get yourself down to this Moroccan-themed but generally eclectic bar for a cocktail, some light snacks or a bigger meal and recline on one of the sofas. It can get busy, particularly later on, but it’s worth getting a drink in for its authenticity. Unlike many Brick Lane venues, which have been created in response to the area’s resurgence as a hipster haven, this venue has been around for years and retains its laidback, north African vibe. There was a time they served shisha, but that went out with the smoking ban of 2007.

Book to stay near Casa Blue from only £18.70 per person

Last updated: 04 Aug 20
Click here for full list of over 329 London accommodations! Search Offers: Save up to 50% for hotels near Casa Blue