Head down to St Pancras Train Station! Stay nearby from only £13.00 per person 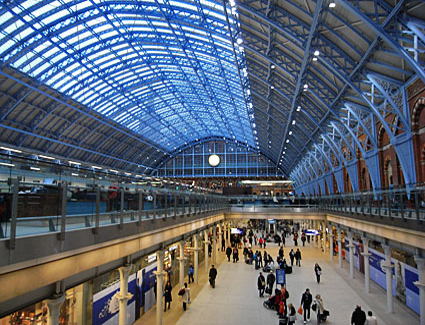 While St Pancras Train Station is like any other terminal, providing services to multiple UK destinations, it is also London's rail connection to Europe. Thanks to a major regeneration at the site in 2007, the Eurostar now terminates at St Pancras, linking London with Paris, Brussels and Lille. Not only this, St Pancras is a hive of activity, with shops and eateries and even Europe's longest champagne bar. The Champagne Bar runs along the entire length of the platform and has the largest menu of champagne by the glass. There is also a gastro pub and chain restaurants on the main platform and lower ground. Art is also a major influence on the station. The Meeting Place is a nine-metre tall bronze statue by Paul Day, which towers over the main platform, while the Betjeman statue celebrates the man responsible for saving the station from demolition in the 1960s. London's large Olympic rings also adorn the station in preparation of the 2012 London Olympics. Also in the area is the British Library, while the British Museum is just a short tube ride away.

TravelStay Offer:
Receive £4.00 cashback towards your stay in London when you book with TravelStay!
Simply enter TravelStay promotional code: ST PANCRAS TRAIN STATION-4
Subject to deposit value of £16.00 or higher.

Book to stay near St Pancras Train Station from only £13.00 per person