Head down to Sadlers Wells Theatre! Stay nearby from only per person 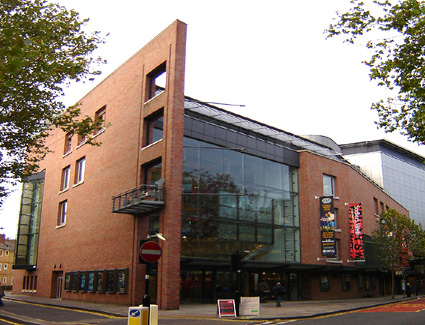 Perhaps one of the coolest theatre venues in London, Sadler's Wells dedicates its stage to the performance of international dance, although other events are put on show here, including hot new UK talent. Sadler's Wells shows something from every genre, from classical ballet to tango, contemporary dance, hip hop and flamenco. It also commissions new work, providing a stage for audiences to see shows for the first time. Noted choreographer Matthew Bourne is also closely associated with the theatre and his work is often performed on the Sadler's stage, most recently his reinvented vision of the classic ballet Cinderella. The theatre has only been on its current site in Angel, Islington, since 1998, which is close to the high street shops and independent boutiques of Upper Street, as well as popular independent restaurants specialising in cuisine from all over the world.

Sadler's Wells is situated in Angel in the borough of Islington, but it is also just minutes on the bus from Kings Cross, home of the Eurostar terminus. While there are plenty of things to see and do in busy Angel, hotels near Sadler's Wells are also ideally situated for reaching Camden and even London Zoo. With TravelStay.com you can find anything from cheap hotels in Kings Cross to hostels in Kings Cross, as well as London B&Bs. Providing close access to both Kings Cross and Sadler's Wells is the two-star Swinton Hotel, while the Clink Hostel offers great rates on beds. We also have plenty of bed and breakfasts near Sadler’s Wells in Kings Cross, such as Elmwood Hotel, while you can find that during certain times of year LSE's Rosebery Hall London rooms are available, located just minutes from the theatre and with its own shared kitchenette. There is no shortage of choice, so just search now and book with TravelStay.com for the best budget London hotels to suit you!

TravelStay Offer:
Receive £4.00 cashback towards your stay in London when you book with TravelStay!
Simply enter TravelStay promotional code: SADLERS WELLS-4
Subject to deposit value of £16.00 or higher.

Selling Fast Best Value
Book to stay near Sadlers Wells Theatre from only £13.00 per person

Last updated: 01 Jul 22
Click here for full list of over 329 London accommodations! Search Offers: Save up to 50% for hotels near Sadlers Wells Theatre