English
Old Bailey, London
Nearby Hotel Offers
Room Type Search
Head down to Old Bailey! Stay nearby from only per person
Quick Links

Head down to Old Bailey! Stay nearby from only per person 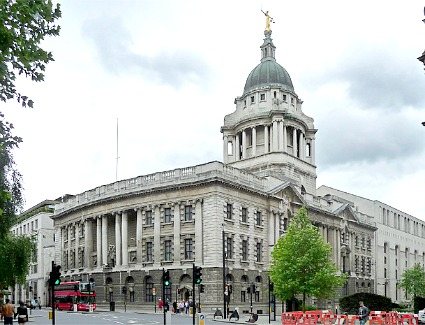 Fans of crime and punishment should head to the formidable Old Bailey while enjoying a break in cheap London accommodation.

This central London building is home to the Crown Court, which tries the most severe criminal cases in the city and sometimes other parts of the UK.

As there is a requirement for justice to be seen to be done, most cases are open to the public so you never know, you could sit in on one of the biggest cases in history.

The Old Bailey is also steeped in history as more than 100,000 criminal trials were held at the court between 1674 and 1834 including all death penalty verdicts, with people being hanged for crimes as little as stealing a loaf of bread in the 19th century.

Located in The City, bed and breakfasts near Old Bailey place you right in the heart of London’s financial district. Hotels near Old Bailey are perfect for business guests as well as tourists, with many large companies and landmarks nearby. The nearest tube station is St Paul's, meaning you can take in another of London's iconic permanent attractions while staying at a cheap hotel in the City. Search now to find the perfect option for you through TravelStay.com!

TravelStay Offer:
Receive £4.00 cashback towards your stay in London when you book with TravelStay!
Simply enter TravelStay promotional code: OLD BAILEY-4
Subject to deposit value of £16.00 or higher.

Special Offer Selling Fast
Book to stay near Old Bailey from only £14.00 per person

Last updated: 27 Jan 23
Click here for full list of over 329 London accommodations! Search Offers: Save up to 50% for hotels near Old Bailey