Head down to Wembley Stadium and Tour! Stay nearby from £16.00! 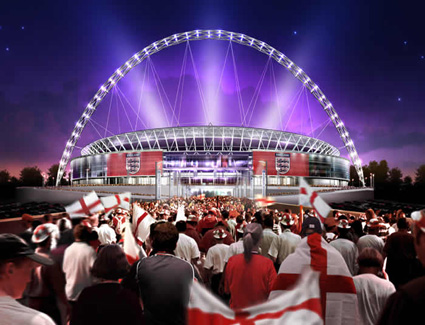 Football fans cannot miss a trip to Wembley Stadium, which has been the home of English football since 1923. Now completely rebuilt, the stadium takes up to 90,000 fans and hosts the FA Cup Final and other major events. You can also catch the Rugby League's Carnegie Challenge Cup here, as well as American football matches and even motor racing. The stadium has also been the location of some high profile music events such as Live Earth and the Concert for Diana. Even if you don't have tickets to see a match or gig at Wembley Stadium, you can still take a tour of the huge venue and get up close to the iconic 133-metre tall arch. The 90-minute tour takes you into the England team changing room and through the daunting Players Tunnel. You can also climb the Trophy Winners' steps and sit in England manager Fabio Capello's seat on the grounds, finishing off with a hold of a replica FA Cup. The history of the old Wembley Stadium is also on display here, with objects including the 1966 World Cup crossbar which took England to victory and the torch that launched the London Olympic Games in 1948. While in the area, you can head nearby to Wembley Arena and catch a gig by some of the world's biggest acts.

Located in north-west London, the hotels near Wembley Stadium & tour allow you to stay away from the hustle and bustle of Central London but still reach the sights and attractions in less than half an hour. TravelStay.com has a selection of cheap London hotels available to choose from, as well as London bed and breakfasts and London hostels in Wembley. For great value budget rooms, try the two-star Wembley Hotel London, putting you within walking distance of Wembley Stadium, or the Euro Hotel Wembley offers cheap and comfortable one-star rooms nearby. Ticket-holders after a no-frills stopover can head to the All Star Hostel London, a London hostel in Kilburn, just a short tube ride away, while the Hollingbury Hotel in Harlesden offers London B&B rooms. There is so much choice available to you depending on the type of accommodation you want, so just check out TravelStay.com for great deals!

TravelStay Offer:
Receive £3.00 cashback towards your stay in London when you book with TravelStay!  Simply enter TravelStay promotional code: WEMBLEY STADIUM AND TOUR. Subject to deposit value of £15.00 or higher.

Top Pick New
Book to stay near Wembley Stadium and Tour from only £16.00 per person

Last updated: 01 Feb 23
Click here for full list of over 329 London accommodations! Search Offers: Save up to 50% for hotels near Wembley Stadium and Tour