English
Tate Britain, London
Nearby Hotel Offers
Room Type Search
Head down to Tate Britain! Stay nearby from only £16 per person
Quick Links

Head down to Tate Britain! Stay nearby from only £16 per person 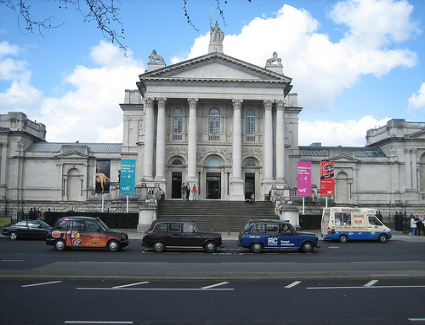 Tate Britain: British art from Hogarth to the Turner Prize

Perhaps one of London's most traditional art galleries, Tate Britain stands on the banks of the River Thames and displays mostly British works of art from 1500 to the present day. Here you can find paintings by William Hogarth, as well as 20th century sculpture from Henry Moore, Barbara Hepworth and Francis Bacon. Tate Britain also dedicates three galleries to the UK's most influential Romantic artists, Blake, Constable and most predominantly, the Turner Collection, which comprises around 300 watercolours by the artist. Every year the Turner Prize is also held here, celebrating new contemporary British art since 1984. The Tate displays the finalists of the prize every year between October and January, with the winner being announced in December. The gallery is free, although the Turner Prize and other special exhibitions have a fee. Starkly different from Tate Britain, both in terms of the collection and the building's architecture, is Tate Modern, which stands on the South Bank east along the Thames.

Situated in Millbank in between Victoria and Westminster, hotels near Tate Britain are convenient and are in a stunning location. Walking to other tourist attractions such as Westminster Abbey takes just minutes from Tate Britain, while there are also plenty of things to see and do in Victoria. TravelStay.com offers any variety of accommodation in the area, from cheap hotels in Victoria to London hostels and London B&Bs. The Grange Wellington Hotel is a grand budget hotel in London, while the Corbigoe Hotel is another example of the hotels near Tate Britain. We have London hostels in nearby Victoria such as the Astor Victoria, as well as bed and breakfasts near Tate Britain in Victoria like the Carlton Hotel. This is a popular area in London for tourists so make sure that you search now and book with TravelStay.com to find the best cheap London hotels.

TravelStay Offer:
Receive £4.00 cashback towards your stay in London when you book with TravelStay!
Simply enter TravelStay promotional code: TATE BRITAIN-4
Subject to deposit value of £16.00 or higher.

Book to stay near Tate Britain from only £16.00 per person