English
Selfridges, London
Nearby Hotel Offers
Room Type Search
Head down to Selfridges! Stay nearby from only £22.25 per person
Quick Links

Head down to Selfridges! Stay nearby from only £22.25 per person 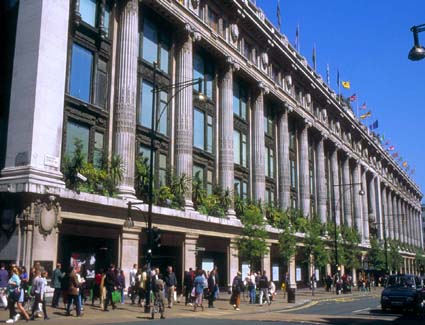 From high street fashion to high-end pieces from the world's biggest designers, Selfridges is one of London's best and largest department stores. Situated on Oxford Street, the imposing store sells everything from fashion to home and leisure, beauty and food. It has the advantage of being in the main thoroughfare of London's popular shopping district, as well as being close to New Bond Street, which is where the trail of designer fashion houses begins. Selfridges' large window displays are also a sight to see, with each one being a work of art in itself. Flocks of shoppers also come to see the lavish Christmas window displays put on at the store. There is plenty to see and do in the area that surrounds Selfridges, predominantly shopping. Oxford Street shopping is synonymous with flagship versions of the UK's top high street shops, including a huge TopShop and Primark, although just a short walk away from Selfridges is also the Marble Arch and Hyde Park.

Hotels and BnBs near Selfridges London

Selfridges department store is located in the heart of Oxford Street, ideal for shopping fanatics. However, it is also in close proximity to Hyde Park and Marble Arch, which are popular bases for tourists. Therefore, hotels near Selfridges are in plentiful supply. TravelStay.com has London hostels, London bed and breakfasts and budget London hotels available to book. For example, you can try the two-star cheap London hotel the Marble Arch Inn or London B&B the Boston Court Hotel, both within easy walking distance of Selfridges. We also have the Griffin House Hotel nearby and London hostels such as the Dolphin Inn. Meanwhile, if it is four-star luxury you're after, then we have great rates at the Shaftesbury Metropolis London Hyde Park. So whatever your budget, search on TravelStay.com for the best rates for bed and breakfasts near Selfridges!

TravelStay Offer:
Receive £4.00 cashback towards your stay in London when you book with TravelStay!
Simply enter TravelStay promotional code: SELFRIDGES-4
Subject to deposit value of £16.00 or higher.

Top Pick Family Friendly
Book to stay near Selfridges from only £22.25 per person

Last updated: 30 Jan 23
Click here for full list of over 329 London accommodations! Search Offers: Save up to 50% for hotels near Selfridges