English
Kennington Park, London
Nearby Hotel Offers
Room Type Search
Head down to Kennington Park! Stay nearby from only per person
Quick Links

Head down to Kennington Park! Stay nearby from only per person 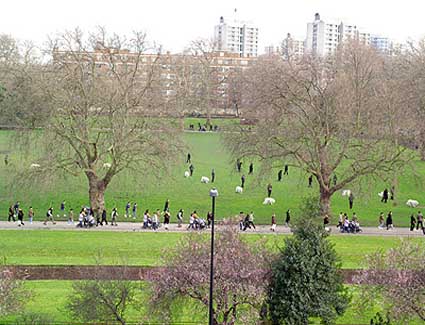 Kennington Park hasn’t always had the beautiful, peaceful and affluent associations that it enjoys today. While it was a common, within sight of the smoky factories and wharfs that typified the industrial revolution, the working-class movement the Chartists staged a mass protest here and were faced down by an enormous opposing government force made up of conscripted policemen. The powers that be were afraid enough of the movement to get infantrymen to protect their houses, and orders were issued to 170,000 otherwise civilians. After Kennington Common became Kennington Park, it was also a place of public execution! Today, however, it is a beautiful park with a number of attractions, and is hugely popular with Londoners.

Hotels near Kennington Park offer visitors the delights of a beautiful and residential part of the capital. There’s plenty to do, including catching a play at the White Bear, roaming the park or heading to the Oval cricket ground to witness a game. There are also a great number of Victorian pubs with great interiors and quaint, reasonably-priced restaurants. The attractions of Waterloo are within walking distance. TravelStay.com has a great number of offers on cheap hotels, hostels and bed and breakfasts near Kennington Park, so to make the most of these great deals, search now or scroll down today!

TravelStay Offer:
Receive £4.00 cashback towards your stay in London when you book with TravelStay!
Simply enter TravelStay promotional code: KENNINGTON PARK-4
Subject to deposit value of £16.00 or higher.

Book to stay near Kennington Park from only £12.10 per person