Head down to Chelsea FC Stamford Bridge! Stay nearby from only £12.00 per person 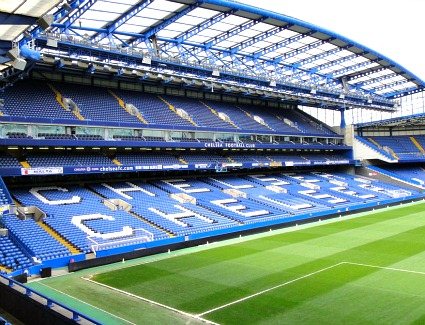 Fans of Chelsea Football Club flock to their club’s ground in West London to pay homage to their beloved team. Whether you’re a supporter or just a football fan, a trip around Chelsea FC Stamford Bridge is a fascinating insight into the workings of a grand football stadium. You can go on a guided tour, have a nose around the home and away dressing rooms, feel the thrill of walking through the players’ tunnel to the pitch, and learn about the history of the club in the museum.

Bed and breakfasts near Chelsea FC Stamford Bridge not only give visitors easy access to the football but also the calm and upmarket attractions of Fulham. With an array of shops from high street names to luxury retailers, great restaurants and a huge selection of pubs, you’ll never be short of things to do. TravelStay.com has the most up-to-the-minute deals on hotels near Chelsea FC Stamford Bridge available, so don’t delay! Search now or scroll down to find the best offer for you!

TravelStay Offer:
Receive £4.00 cashback towards your stay in London when you book with TravelStay!
Simply enter TravelStay promotional code: CHELSEA FC STAMFORD BRIDGE-4
Subject to deposit value of £16.00 or higher.

Book to stay near Chelsea FC Stamford Bridge from only £12.00 per person