English
Carnaby Street, London
Nearby Hotel Offers
Room Type Search
Head down to Carnaby Street! Stay nearby from only per person
Quick Links

Head down to Carnaby Street! Stay nearby from only per person 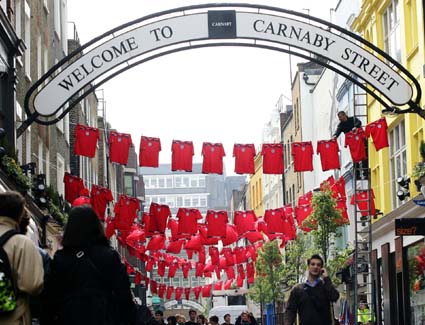 Carnaby Street: The height of fashion since 1960

Shopping on Carnaby Street has been one of the coolest things to do in London since 1960, when boutique fashion stores were established along the 12 mini streets and set the style of the swinging sixties. Now, Carnaby Street is much the same, with some high street stores moving in, but many independent shops, cafes, bars and clubs remain. Tucked away in Kingly Court is a unique shopping area on two floors, with a great central court filled with coffee shops. Meanwhile, you can find anything from women's fashion to footwear along the other pedestrianised streets. What is so unique about Carnaby Street is that it is just next to the busy shopping district of Oxford Street and Bond Street. Located on the corner of Carnaby Street is the impressive Tudor building of Liberty, a high-end department store that is known for its stunning architecture as well as the products sold inside. And while the street stays alive well into the early hours with the bars and clubs at Carnaby Street, the famous London Palladium also sits at the top of one end, a theatre often thought to have London's best stage.

Staying in hotels near Carnaby Street is perfect for keen shoppers. Bed and breakfasts near Carnaby Street will also put you close to Oxford Street and Piccadilly, home to London's Theatreland. For the best low-cost option, a London hostel could be the answer. Indeed, the Piccadilly Backpackers Hotel has one of the best central locations offered by TravelStay.com and comes at unbelievable rates! Or, you could really splash out on some luxury at the four-star Shaftesbury Piccadilly Hotel, recently refurbished and surrounded by London's nightlife. Alternatively, you could find somewhere in the middle and go for one of TravelStay.com's cheap hotels in Central London such as the Hallam Hotel London. All of these London accommodation options are close to Carnaby Street and the surrounding area, so search book your stay now!

TravelStay Offer:
Receive £4.00 cashback towards your stay in London when you book with TravelStay!
Simply enter TravelStay promotional code: CARNABY STREET-4
Subject to deposit value of £16.00 or higher.

Book to stay near Carnaby Street from only £33.80 per person

Last updated: 27 Jan 23
Click here for full list of over 329 London accommodations! Search Offers: Save up to 50% for hotels near Carnaby Street