Head down to Knights Templar Pub! Stay nearby from £13.00! 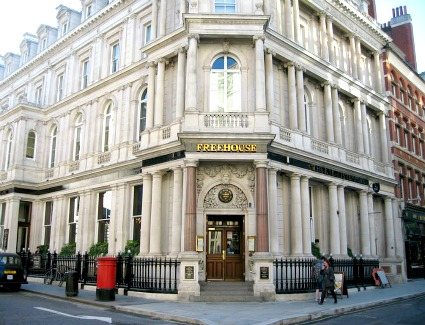 On your first visit to Knights Templar Pub, you will annoy anyone behind you by just standing and staring as soon as you walk in. The ceiling is vaulted and cavernous, and it is one very large room, built as a bank and demonstrating the best of neo-classical Victorian architecture. It was repurposed in 1999 and it’s a good thing too, as anyone can now luxuriate in its amazing, marble-clad setting. There are stairs to a gantry that overlooks the entire pub at a quite dizzying height, that you can go and sit on the same as anywhere else (don’t drink too much if you’re doing that though), and as it’s a Wethersoons pub (don’t let that put you off) the drinks are very reasonably priced and the food respectable.

Book to stay near Knights Templar Pub from only £13.00 per person

Last updated: 04 Aug 20
Click here for full list of over 329 London accommodations! Search Offers: Save up to 50% for hotels near Knights Templar Pub