English
Thorpe Park, London
Nearby Hotel Offers
Room Type Search
Head down to Thorpe Park! Stay nearby from only £11.67 per person
Quick Links

Head down to Thorpe Park! Stay nearby from only £11.67 per person 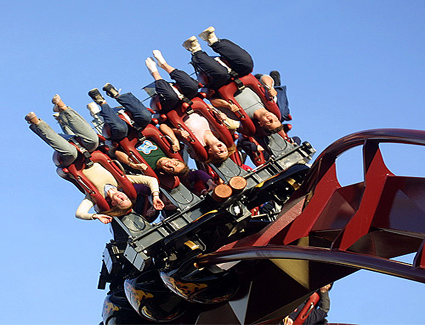 Thorpe Park is one of the UK's most thrilling theme parks, with some absolutely stomach churning rides. Situated in Surrey, just outside London, it provides a great day out once you've seen the sights and sounds of Central London. Just some of the heart racing rides include Saw The Ride based on the movie franchise which has a 100 degree 'beyond vertical' drop, while Stealth launches you from 0-80mph in under two seconds and to a height of 205ft. Or, see if you can cope with ten loops on the Colossus, or a G-Force of 4.5 on the Nemisis Inferno. Its most recent extreme ride has launched for the 2011 season. Named Storm Surge, it will send riders spinning down a 64-foot raft. While Thorpe Park is the perfect place for adrenalin junkies, the park does also have rides to suit people of a calmer nature, and a short train ride or drive towards London will bring you to Hampton Court Palace. Thorpe Park is also convenient for reaching one of the biggest airports in the world, Heathrow.

Ideal for seeing the sights outside London, Surrey is a peaceful area, with easy access by bus, rail and road to Heathrow Airport, Hampton Court Palace, Richmond and the shops of Kingston-Upon-Thames. Not only this, it is also where Thorpe Park resides, which has the UK's biggest extreme rollercoasters. Getting into London is easy, and you can reach Waterloo in around half an hour. TravelStay.com has a selection of hotels near Thorpe Park, from London bed and breakfasts near Thorpe Park to London hostels and budget rooms. Putting you in close proximity to Thorpe Park and Heathrow is Heathrow Lodge, a great value two-star London B&B while the three-star Holiday Inn London Kingston South is located near to Hampton Court Palace. Travellers sticking to a tight budget could find that the Revive Lodge Heathrow is a no frills London hostel with unbeatable rates. Or for something a bit different, we have Kingston Upon Thames Budget Rooms, owned by the university, complete with communal kitchen. There is so much choice available so search now on TravelStay.com for the best cheap London hotels.

TravelStay Offer:
Receive £4.00 cashback towards your stay in London when you book with TravelStay!
Simply enter TravelStay promotional code: THORPE PARK-4
Subject to deposit value of £16.00 or higher.

Book to stay near Thorpe Park from only £11.67 per person

Last updated: 25 Nov 22
Click here for full list of over 329 London accommodations! Search Offers: Save up to 50% for hotels near Thorpe Park