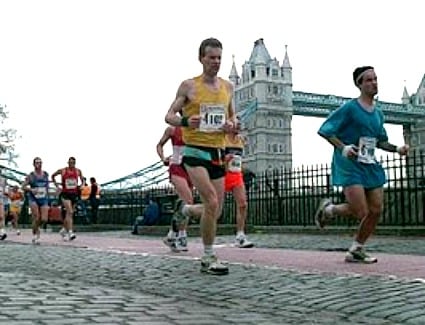 Have you been enthused about exercising in light of the great summer of British sporting success? If so, you're surely keen to attend the world famous Virgin London Marathon. We'll give you £3 cashback when you book, simply enter TravelStay promotional code: LONDON MARATHON

Since the event was first staged in 1981, it has become a highlight of the British sporting scene, rivaling events like the FA Cup and the Challenge Cup Final in terms of prestige.

The next edition will staged on April 21st, 2013, and is set to attract all of the big-name competitors from the world of marathon running.

The streets of the capital will be lined with people cheering on the professional athletes, and the many thousands of people who will be raising money for charity.

Fun runners, as they are known, will pass by some of the city's most well-known landmarks, including Tower Bridge and St Paul's Cathedral.

While there is no cost involved in watching the marathon, you'd be well-advised to turn up earlier on the day to secure a good vantage point.

And with 26.2 miles of course to choose from, there's no excuse for not getting a glimpse of some of the world's best athletes.

View London Marathon 2013 on a map

TravelStay Offer: Receive £3 cashback towards your stay in London when you book with TravelStay! Simply enter TravelStay promotional code: LONDON MARATHON. Subject to deposit value of £15 or higher.

Last updated: 05 May 21
Click here for full list of over 329 London accommodations! Search Offers: Save up to 50% for hotels near London Marathon 2013