Head down to Hampton Court Palace! Stay nearby from only per person 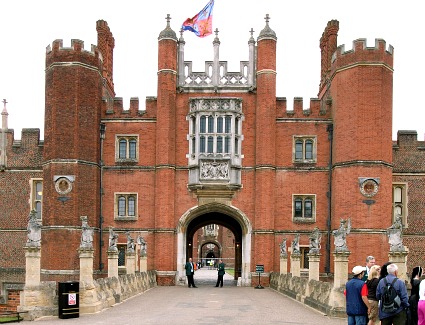 When you think of grand royal palaces, chances are you’ll conjure up an impressive building something like Hampton Court Palace. Walk in King Henry VIII’s footsteps and step back in time to live life like the Tudors, exploring the huge kitchen and viewing a re-creation crown. Discover what life was like for George I and William III, salivate in the chocolate-making kitchen, try not to get lost in the most famous maze in the world, and marvel at the gardens, and all within easy reach of Central London!

Located in East Mosely, Hampton Court Palace is one of London’s most iconic and stunning palaces, and offers its own attractions, such as the grounds and the summer film and music festivals. If you want to stay in one of the hotels near Hampton Court Palace, then you’re not short of things to do away from the Palace itself either. Just over the river are some of the area’s best restaurants, or you could just take a picnic down to the bank of the Thames and enjoy the sights. TravelStay.com has a great selection of hotels in the East Mosely and Hampton Court areas, so scroll down or search now to book one of our cheap bed and breakfasts near Hampton Court Palace and make the most of our constantly updated deals!

TravelStay Offer:
Receive £4.00 cashback towards your stay in London when you book with TravelStay!
Simply enter TravelStay promotional code: HAMPTON COURT PALACE-4
Subject to deposit value of £16.00 or higher.

Book to stay near Hampton Court Palace from only £12.50 per person

Last updated: 25 Nov 22
Click here for full list of over 329 London accommodations! Search Offers: Save up to 50% for hotels near Hampton Court Palace