Head down to Apollo Victoria Theatre! Stay nearby from only per person 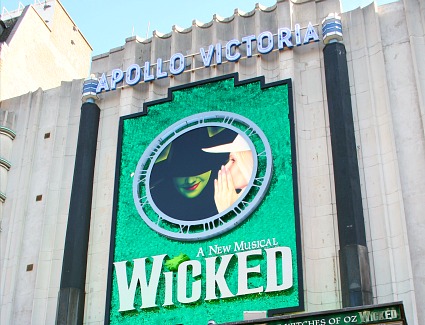 The impressive, art-deco frontage of the Apollo Victoria Theatre, which opened as a cinema in 1930, will be familiar to the millions of people worldwide who have journeyed to see a show there as well as the (probably) billions of people who use Victoria Train Station on a daily basis. As with many theatres, its usage has varied over time, and you wouldn’t believe that one of London’s highest grossing theatres was actually facing demolition at one stage in its life. It was rescued, and over time became a dedicated musical theatre venue. Having had the award-busting Wicked on its boards for nine years, it doesn’t show any sign of slowing down!

Visitors staying in bed and breakfasts near Apollo Victoria Theatre are within a few seconds walk of one of London’s most far-reaching transport networks, as well as the nearby areas of Chelsea and Piccadilly. You can walk the short distance to the Queen’s residence of Buckingham Palace and take in the splendour of Green Park and St James’s Park. Hotels near Apollo Victoria Theatre are plentiful, and TravelStay.com has the best and latest deals available anywhere. In order to make the most of these great bargains, either scroll down or search now!

TravelStay Offer:
Receive £4.00 cashback towards your stay in London when you book with TravelStay!
Simply enter TravelStay promotional code: APOLLO VICTORIA THEATRE-4
Subject to deposit value of £16.00 or higher.

2 Star B and B
3.6
B&B near Apollo Victoria Theatre, LondonView map
0.0 Miles

Book to stay near Apollo Victoria Theatre from only £15.00 per person

Last updated: 10 Aug 20
Click here for full list of over 329 London accommodations! Search Offers: Save up to 50% for hotels near Apollo Victoria Theatre