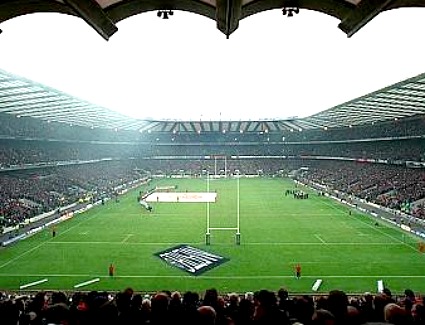 Are you a fan of rugby union? And are you stirred by the thought of watching England take on their old enemy Scotland at Twickenham? We'll give you £3 cashback when you book, simply enter TravelStay promotional code: SIX NATIONS 2013

If so, then you really ought to be in London on Sunday February 2nd, when Stuart Lancaster's boys will seek to record their first win of the 2013 Six Nations tournament.

As well as setting themselves up for this year's event, England will be determined to capture the Calcutta Cup in front of a sell-out crowd of 82,000.

It's certain to be a bloods and guts affair that will rouse the partisan crowd inside one of the world's most famous sporting arenas.

England narrowly lost out on the Six Nations title in 2012 and they will be keen to put on a positive performance against their historic rivals.

The game will take place on the first weekend in February and while the tickets have yet to go on sale, be sure to check the official RBS Six Nations site for updates.

If you're travelling to the stadium via public transport, the nearest overground station is Twickenham while the nearest underground is Hounslow East.

TravelStay Offer: Receive £3 cashback towards your stay in London when you book with TravelStay! Simply enter TravelStay promotional code: SIX NATIONS 2013. Subject to deposit value of £15 or higher.

Family Friendly Recession Buster
Book to stay near Six Nations 2013 from only £12.50 per person

Last updated: 04 Aug 20
Click here for full list of over 329 London accommodations! Search Offers: Save up to 50% for hotels near Six Nations 2013