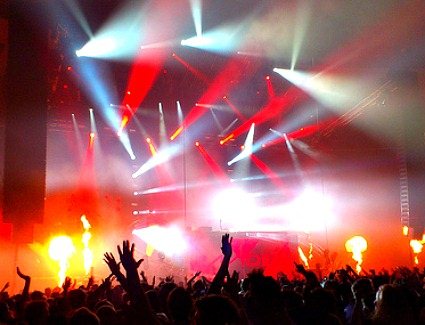 Are you a electronic dance music enthusiast who can’t imagine anything more fun than throwing shapes all day and night to the best DJs in the world? If so, then why not check out the Electric Daisy Carnival, on 20th July 2013 in Stratford, London. You'll also be able to find a nearby hotel in Stratford, London from only £15.00 per person!

The festival has become a stalwart of the US dance music scene, becoming the country’s largest event of its kind spread across New York, Chicago, Puerto Rico, Orlando and Las Vegas. This is the first time it has ventured across the Atlantic, taking up residence in the Olympic Park venue in East London for just one day.

Those attending can expect their senses to bombarded with one of the most immersive audiovisual experiences around across multiple stages that are pumping out some of the world’s best dance music. DJs such as Tiesto, Goldie and Steve Angello will all be playing the London spin-off event. What’s more, there’s carnival rides and the EDC signature performers to keep people entertained.

Electric Daisy Carnival is taking place on Saturday July 20th at the Queen Elizabeth Olympic Park in Stratford, East London. The venue is incredibly well connected via public transport, connecting with the DLR, Jubilee and Central Line, as well as train services to Liverpool Street Station in Central London and Essex, East Anglia and London Overground services. A wide array of buses also connect to the location. Tickets are priced at £54.25 for local residents and £72.50 as standard.

Hotels near Electric Daisy Carnival are available from just £16.45 per person!

If you’re travelling from far, why not make the most of your trip to London and extend you visit? There are plenty of cheap hotels in Stratford where you can stay, or could even look at B&Bs in Hackney to get a little closer to the action.

TravelStay Offer: Receive £3 cashback towards your stay in London when you book with TravelStay! Simply enter TravelStay promotional code: ELECTRIC DAISY CARNIVAL. Subject to deposit value of £15 or higher.

Customer Favourite Best Value
Book to stay near Electric Daisy Carnival 2013 from only £15.00 per person

Last updated: 19 Feb 20
Click here for full list of over 329 London accommodations! Search Offers: Save up to 50% for hotels near Electric Daisy Carnival 2013